Friday sucked. I blocked my calendar for the late afternoon in an attempt to make it to the studio for wine and a social life and everything! At 4:30, I got back to my desk, shut everything down and was heading for the door when my dear boss informed me that my supplier was on his way with parts for me to approve and I had to wait for him to arrive. Best part? The parts he brought were the same ones my boss approved while I was on vacation. Let's hear it for pointless! I finally made it home after 7:00... to find the Peanut on the rug, wheezing. I gave it a couple of hours, and she seemed to be getting worse so we headed into the emergency vet. 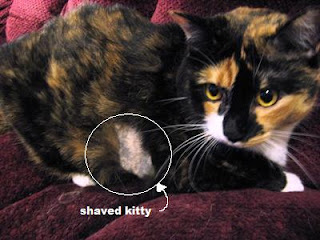 $500 and a shave job later, they gave her a shot which they thought "might" help, since they had no clue what was wrong with her. The xray showed that one of her lungs was not working - maybe full of fluid - but they tried three time to extract some and didn't get any. So they sent me home at 1 am to watch her and see how things progressed, since the next step was exploratory surgery. I set up a litter box downstairs so she didn't have to manage the stairs and fell into bed. At least now I know that she really does weigh a ton, in cat terms anyway - she tops the scales at 16.5 pounds.

Saturday, she seemed a bit better so I went ahead with my typical schedule. I stopped at Dunkin' Donuts for a breakfast sandwich and 2 extra large coffees then headed into the studio. They did a glaze firing since my last visit. I'm so happy with the way my things turned out! Well, my coffee mug still needs some work, I'll be reglazing it. Everything else though, I'm thrilled with!

One of the ladies did a coffee mug that was really cool - textured on the bottom and then glazed on the top and inside. This is my sincere form of flattery, except as a vase: 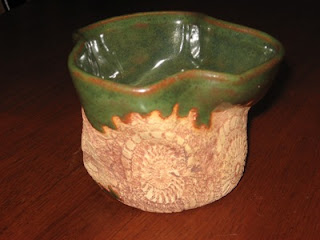 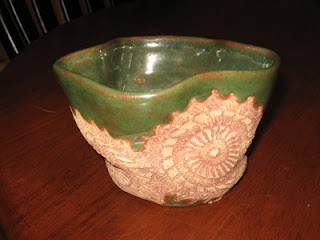 I was rooting through the drawers of stuff in the studio a few weeks ago and found an impression of a little lizard in plaster. I thought it was just adorable, so I put one on a bowl. That makes it sound easy. It really wasn't. I think part of the reason that I'm so fond of the pottery is that it isn't just pottery the way I do it. It's sculpture and painting and all manner of things. I painted my little lizard green, the bowl is purple and then I added a crawl to him to add texture, and he turned out great! I had a friend in mind when I made him and I think she's going to love him. What do you think? 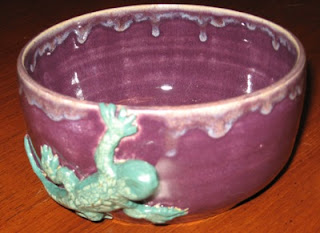 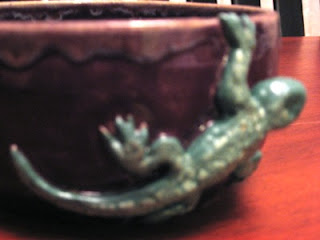 A couple other things came out of the firing too - nothing super special, but I'm happy with the results. A little blue bowl, and a little brown one with a lip. The brown one should have had a darker rim, but that didn't work out exactly as planned. (I should probably add some kind of scale to these. The brown one is about four inches across, and the blue one is a bit less than two inches across.) 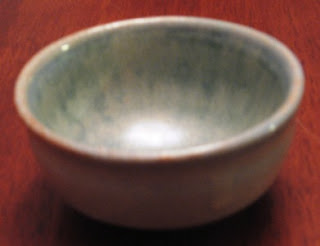 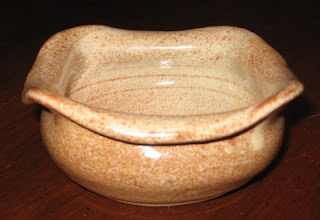 I bought a book a couple of weeks ago, and I love it. It's called "The Chinese Brush Painting Bible" by Jane Dwight. It gives step by step instructions for flowers, birds, bugs, landscape elements, etc. I'm not painting them, I'm carving them into the sides of my wet clay bowls. You can't count your pots 'till they come out of the final firing, but I've done a couple of things that I'm excited about. I'm not really an artist - I can't come up with an original thought to save my life, but if the picture is in front of me, I can copy it. So, we'll see how these come out.

From the studio, I came home and checked on the Peanut. She seemed a bit better, so I left to meet my friend for dinner at a Japanese steakhouse. Oh. Yum. I had the filet and chicken combination, with a glass of plum wine. So very very good.

From dinner, we headed to an auction. This is the first time we've been since "our" auctioneer moved to his new location - about 15 minutes away. It's not quite the adventure that it was before - when it was an hour trek into the wild to find him - but it was super convenient. I didn't get a table - the ones they had were beat up and water damaged - but I did find a few things...

A neat lamp, which needs a shade. 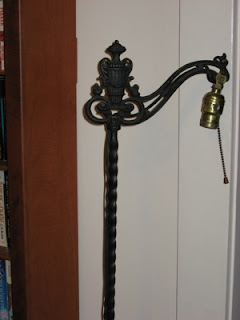 A wooden stool, which needs refinished, but that should take less than an hour and it was $3 and it's perfect for my shop. Also, I got a chair. It came from a priest's estate, and between that and the cherubs, I almost expected to burst into flame when I sat on it. It's super ugly, what with the cherubs and all, but it's really comfortable. Next up: adventures in reupholstering. It can't be that hard, right? 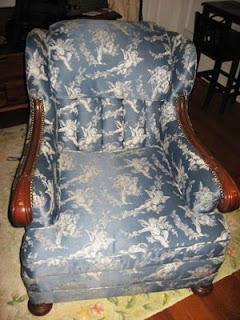 Seriously. Cherubs. Who puts that on furniture?? 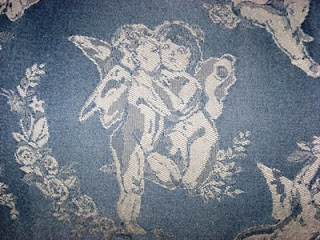 The real prize of the night though was a bag full of cds. I love doing this, and I've found some really great artists this way. (Last time, I bought every cd the library was selling for $0.75 each and listened to them on the commute to and from work. Some of the songs made my (and my coworker) ears bleed, but some were pretty cool.) 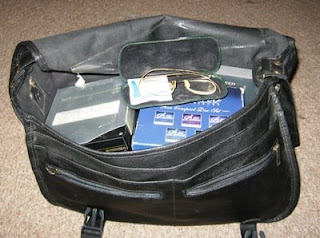 I ended up with 58 cds for $10, plus a bonus pair of specticles and a messenger bag. The cds are in these nifty cases - each case holds 6 disks and the brand name on it is pioneer, so clearly they're part of some kind of sound system. There's at least one Kenny G in there, and it seems to lean heavily toward classical (which I like) and Mexican (which I don't know enough about to say) so that should be an adventure.

From there, I dropped my friend off and headed home. The Peanut met me at the door, clearly she was feeling better, so that was a relief.

I caught up on my sleep today. When I wandered downstairs this afternoon, I found te Peanut bouncing around as normal. I'm going to just assume that the shot they gave her at the vet's worked 'cause otherwise that $500 was a total waste and that'll just make me unhappy... so the shot fixed her!

My friend just got back from vacation, and she shared the peaches that she got in her rambles. I had one for "breakfast." OMG. I forget how good peaches are when you get them fresh and ripe from a farm. The juice ran down my chin and it was like eating sunshine. It took a ridiculous amount of self-control to not snarf down the rest of them. 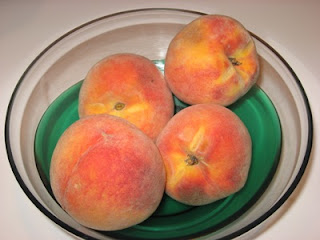 Then I spent an hour lounging on the couch with my Sophia and now I'm playing online, so the rest of the weekend made up for Friday. Hope your weekend is going well! Sophia, in a more playful mood... 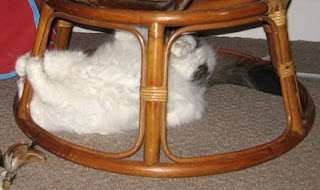 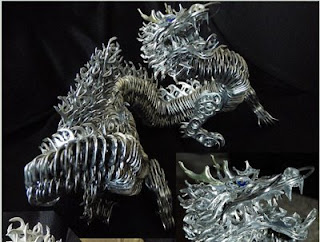 How cool is that? OniMushaKid made it from pop tabs.

It's my most recent "coolest thing ever."
Posted by Ericka at 10:47 PM No comments:

This was taken at a rest stop in (I think) Virginia on my way back here from vacation a couple of weeks ago. I took it with my shiny new iphone!

I'm almost done with the vacation post, with pictures, but I keep getting distracted by all the apps (okay, games) that I've downloaded to my shiny new iphone. My current favorite is "HarborMaster" where you have to organize ships in and out of docks. Simple, yet addictive. I have to put it down now and go to bed - I'm up way too late on a work night. *yawn*

To steal from Suldog, soon, more with better stuff...
Posted by Ericka at 11:22 PM 3 comments: