The Time, It FLIES.

Isn't there a Chinese or Arabic curse, along the lines of living in interesting times?  I TOTALLY get that.  I think I'm FINALLY sorta, somewhat close to a gloriously boring rut.  Oh, how I crave thee, boring rut!


Moving back to Ohio did not work out as anticipated.  I moved into a lovely house 50 miles from my parents, which realistically is as close as I will ever live, and in a bit over a year, they visited 3 times.  If I wanted to see them, or if I wanted them to see their only grandchild, I had to rearrange my schedule and drive to them.  Most of the friends I had in college left the state, the ones remaining weren't the friends I thought they were, except for the 2 who liked me but couldn't stand kids.


Then, on February 26, 2015, I walked into the first "weekly" meeting with my boss in months to find HR in there too.  The company was not growing as expected and they eliminated my position, effective immediately.  By the time the HR lady had gone through my severance letter, my boss had gathered everyone sitting around me and sent them off somewhere, found a couple of boxes, and was waiting at my desk.  He's a sales guy, my role made zero sense in his group, and I was basically counting down until I didn't owe back relocation anymore.  Still, that was a shock.


They gave me 5 weeks severance, 3 months worth of cash for COBRA, forgave the relocation debt, and paid for 3 months of a career placement service, so all things considered, they were pretty cool about it.  I was also eligible for unemployment.


I applied and interviewed for a bunch of jobs in Cleveland, but the offers I got were for contract work.  Meanwhile, my dream job back in Chicago had expressed interest in January, and I'd told them that I wasn't looking, but I saved the email.  The first thing I did after leaving my now-former company was finding that email and sending a note to the recruiter.  I had a couple phone interviews with them in March, they flew me to Chicago for the day for an interview on March 26, and told me in April that I was the "top candidate."    They had some internal hoops to jump through, and well, I sub-let a friend's apartment, moved cat and kid BACK to IL, and started my newest job on June 15, 2015.


My friend's apartment is in Evanston, which is about 40 miles from the job.  This sounds nuts, except that our original daycare is in Niles, about 8 miles from the apartment.  So, as a stop gap until I vetted a local daycare, it worked quite well.  I found a house in Naperville, and got the keys on 6/15/15.

The next week, I was in Ohio for the pack/load.  The following week, Squeak started at the new daycare, our stuff arrived at the new house, and we moved out of the apartment.


Moving is hell.  Unpacking is awful.  It is WAY worse with a mobile, curious toddler.  Oy.  Then a week or so later, Squeak fell on the stairs and broke her wrist.  Cue 6 weeks in a cast up past her elbow.


This is the third time in less than 10 years that I've moved to the Chicago area.  Maybe this time, I'll stay for a while.  *eyeroll*


I'm still unpacking.  We were only in the Ohio house about a year, so I didn't put much of a dent in all of the flood stuff.  Here, I haven't started on the basement.  Or my craft room.  I haven't found my Tupperware.  Colander.  Mixing bowls.  Favorite fall coat.  Squeak's snow pants.  But, we're getting there.  I found some Halloween decorations, and then this week, I took them down and started putting up Christmas decoration.


I was SO proud of myself - I did the ginormous bank of windows in the living room and it took 3 strings of lights, but I only had one bulb to overlap.  Yay, me!  And I got so hung up on hanging the lights that I completed disregarded how Squeak was going to react to them.  Which has basically been like this: 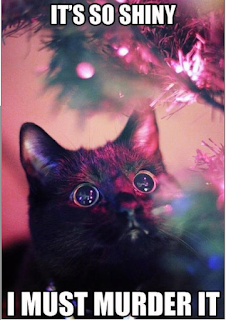 So keeping her from killing the lights has been entertaining.  *eyeroll*


In the spring, when the job offer looked like it was on the way, I texted Squeak's dad to let me know that we'd be back and he made it pretty clear that he didn't care.  No one can say that I haven't tried.